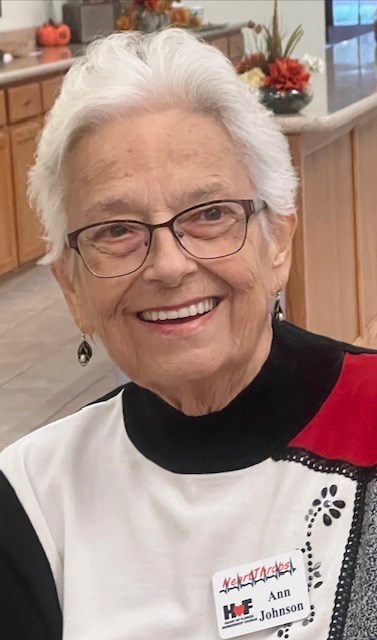 Ann M. Johnson, 79, of Summerfield, Florida passed away on November 15, 2022 in the Brandley House Hospice in Summerfield, Florida. Ann was born in Lockport, New York to Clyde and Margaret Toenniessen on January 7, 1943. She graduated from Newfane Central School in 1960. She married Reed L. Johnson on April 24, 1965 in Olcott, New York. She worked as a secretary for Newfane Senior High School in the guidance department for many years before retiring in 2000. She was a Girl Scout leader, Hockey mom, member of the Order of the Eastern Star of Newfane, NY, member of the American Legion Auxiliary Post 347 Lady Lake, Florida. She was involved in numerous RV camping clubs, enjoyed quilting and crafting. She was well known for her handmade greeting cards. Ann was a constant and enthusiastic supporter of all her family’s activities including husband Reed’s long standing participation in the Shrine Chanters of Buffalo, NY and various barbershop choruses in New York and Florida. Ann is survived by her husband Reed, children; Dale Johnson of Knoxville, Tennessee, Julie and Scott Palka of Newfane, New York, Kurt Johnson (Dr. Erica Boyce) of Newfane, New York, 10 grandchildren and 8 great-grandchildren. Survived by brother, Alan Toenniessen, 5 nieces and nephews. Memorials may be given to St. Jude’s Children’s Research Hospital and Brandley House Hospice in Summerfield, Florida. No services will be performed and her internment will be at the Florida National Cemetery in Bushnell, Florida. The family assembled for a private celebration of life. The family of Ann M. Johnson wishes to extend our sincere thanks to all the staff at Brandley House Hospice in Summerfield, Florida.
See more See Less

In Memory Of Ann Margaret Johnson