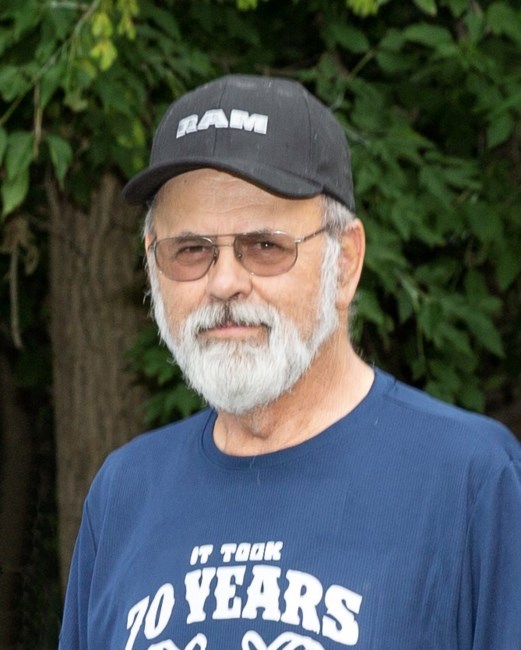 ~ On the afternoon of November 17, 2022, Vernon Thomas Bouley of Cambridge Minnesota died at the age of 72. Vern was born to Marvin and Helen Bouley in Minneapolis, MN in the year 1950. He graduated from Mounds View High School in 1969. As a young man Vern loved cars and most of all racing them. A 1969 Z28 Camaro was his pride and joy back then, and together they collected many trophies. In February of 1974 he married the love of his life Nancy, and together they raised two children, Jeni and Jon. Vern had always wanted to try his hand at farming so in 1976 he and Nancy moved north to Cambridge to do just that. In 1986 Vern decided to switch things up a bit and became a truck driver. He drove over the road for a few years and eventually found his place at AME (AVR) ready mix where he worked for 25+ years before retiring in 2014. He spent his 8 years of retirement enjoying his part time job at SHR Sales in Isanti selling and fixing guns. Vern was a gunsmith, and when he wasn't behind the wheel of a truck he was shooting, repairing, talking, or teaching guns. He was a firearm safety instructor for Isanti County for many years, getting the chance to have each one of his grandsons as a student. Vern was also a scout leader when his son Jon was in scouts. They enjoyed many outings and trips together, the most memorable being a scuba diving trip to the Florida Keys. Vern is preceded in death by his father, Marvin, his mother Helen, and his two brothers Stephen and Dennis. He is survived by his wife Nancy, his 2 children, Jennifer(Jeremiah) and Jonathan(Heidi); 5 grandsons, Cody, Tanner, Cameron, Ethan, and Sam; 3 brothers, Andy(Cheri), Marty(Colleen), Nick(Jhna); and 2 sisters, Sue(Richard), Sandy, and many more friends and family. Vern loved his family and friends dearly and enjoyed spending time with them, especially summers “at the lake.” He enjoyed exploring the campground on his golf cart, and visiting with his friends. Come winter you would usually find him in his “shop” with the heat turned up to 80 degrees, either reloading ammunition, taking apart a gun, or tinkering with his model train set. Some of Vern’s other hobbies included hunting, fishing, trap shooting, NASCAR, and racing RC cars. A celebration of life will be held at 11:00 am on Friday, December 09, 2022 at Christ the King Catholic Church in Cambridge, MN. Visitation will be held prior to the celebration starting at 10:30am. A luncheon will be held in the parish hall following the service.
See more See Less

In Memory Of Vernon Bouley