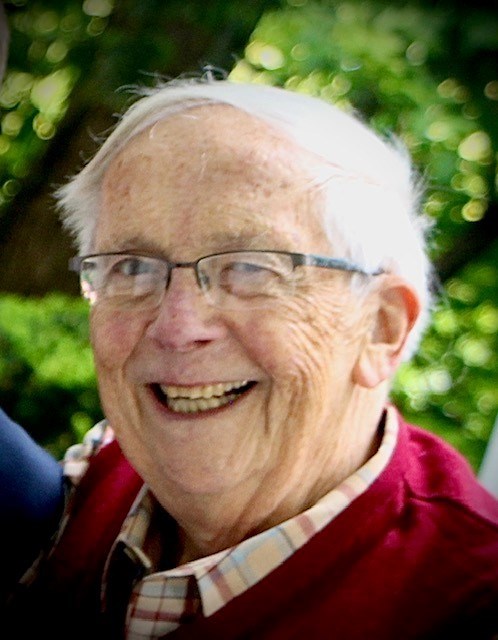 GEORGE BERNARD CHAPMAN passed on March 10, 2022. George was born in Columbia, Tennessee in 1940, the second son of his parents, O. Charles Chapman and Margaret Loretto O’Brien Chapman. His father was born in London and came to the US as a boy in the WW I era. They moved to Forest Hills, NYC, during the War Years, where they shared a large home with his Grandmother, Uncle and Aunt and two cousins. Forest Hills was built by the Russell Sage Foundation and was one of the first planned communities in the US. George said that he felt that move began his life interest in cities and eventually lead him to his long career as a City Planner. He grew up in NYC, the suburbs of Boston, central Tennessee and by the 1940’s the family had moved to a small mining town in central Florida. They settled in Lakeland, Florida where George graduated Lakeland High School, earning a scholarship to the College of William and Mary in Virginia. He graduated in 1961 and became a Tar Heel, earning a Masters in City and Regional Planning from UNC, in 1963. George served as a commissioned officer in the US Public Health Service and subsequently worked for planning consulting firms in the SE. He moved to Washington DC in the tumultuous 1960’s and became Director of Regional Planning for the Metropolitan Washington DC/MD/VA Council of Governments. At a singles party, shortly after he arrived in DC, he asked a young lady for her phone number. Gretchen Nacke, of Midland, Michigan, actually gave it to him, and 3 years (she says an eternity) later they were married in Alexandria, Virginia, and are still happy together after over 51 years. Gretchen was a French teacher in the Fairfax County high schools. They lived there for twelve years and had two daughters, Jennifer and Martha. In the late 70’s, George branched out his career and became the Planning Director for West Palm Beach, Florida. Their son George was born in WPB in 1980. They saw an opportunity for personal and professional growth when the position of Planning Director for the City of Raleigh became available in 1981, moved there with their growing family and settled in. George always said he would be “run out of town” within 5 years, but he was not and retired from the City of Raleigh, in 2005. Gretchen spent many of those years teaching French at Ligon Middle School. After retiring they opened their 1920 home in Cameron Park as Woodburn Cottage, a small B&B. They operated it as a source of joy and intermittent guest home for seven years. Next, they took on the restoration and renovation of a mid-century, 1952 ranch house in Cameron Village, where they have lived since. George’s career was quite active. He served as presidents of Chapters of the American Planning Association in the Northern Virginia area, the DC Metro area, South Florida and finally the State of North Carolina. He was a founding member of the American Planning Association and served on the Board that created the American Institute of Certified Planners, which he also led for several years. He was awarded the George C Franklin award by the NC Institute of Government. He taught planning courses at UNC-CH, NCSU and other schools in the DC area. He and Gretchen became active in Raleigh Sister Cities, where their love of French tradition and culture lead them to many trips to our Sister City, Compiegne, and the establishment of Compiegne Park, just off Hillsborough Street. George was pre-deceased by both his parents and his brother, Chuck, more than a decade ago. Chuck’s daughters, Edie and Lynn, have been loving and supportive since. Each of them had two children; Patrick, Keith, Amanda and Brad, who became George and Gretchen’s “honorary grandchildren” and remain close. Chuck’s first wife died very young and later Chuck married Frankie, our special friend who brings laughter wherever she goes. George was active in his church and helped to build a new sanctuary in North Raleigh, St. Raphael’s. The family later became active at the old Sacred Heart Cathedral in downtown Raleigh, where George served on the Parish Advisory Council. His pleasures in life were his wife of 51 years, Gretchen and his family; including his three children: Jennifer Thackery of Morristown, NJ, Martha Ryals of Raleigh and George Alfred Chapman, also of Raleigh. All of them and their families, including Adam Thackery and Robert Wilson Ryals, III. brought him pride and pleasure. He took great joy in the love and progress of his five grandchildren: Mark Thackery (16), Claire Thackery (13): Reese Ryals (13); Robert Wilson Ryals, IV (9); and Diana Ryals (7). He left this world and his City of Raleigh, a better place and as a happy man. The family will receive friends at The Tucker House, 418 N. Person Street, on Friday March 25, 2022 from 5-7pm. A Mass in celebration of his life will be held at the Sacred Heart Catholic Church, 200 Hillsborough Street, on Saturday March 26, 2022 at 2pm. In remembrance of George’s life, the family asks that donations be made to Raleigh Sister Cities, https://www.raleighsistercities.org/george. Fond memories and expressions of sympathy may be shared at www.nationalcremation.com for the Chapman family.
See more See Less

In Memory Of George Bernard Chapman