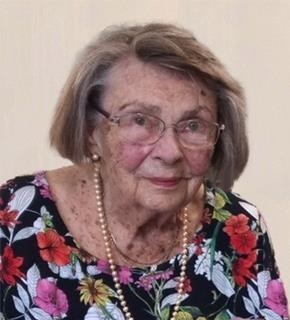 Margaret P. Damaré, 94, of Ormond Beach, FL passed away on Sunday, November 13, 2022, holding her eldest child’s hand after participating in Catholic Mass. Margaret was born Margaret Petronella Amelia Hoss in Jacksonville, FL on August 19, 1928 of immigrant parents Anna Hoss (Pforzheim, Germany) and Henry M. Hoss (Köln, Germany). Her immediate family then lived in Germany while she was very young, in order to help her grandmother and aunt escape to America. Returning to Jacksonville, Margaret learned English, with a southern accent, while attending St. Paul’s Catholic School, where she became an All-State player and Captain of the basketball team. She met her beloved husband, Hilton G. (“Hup”) while in nursing school at Charity Hospital in New Orleans, LA. Hup and Margaret shared many adventures over their nearly 60 years of marriage. Chief among them was raising 7 children while making homes in cities across America. After retirement, Margaret and Hup returned to Florida, living in Ormond Beach for over 30 years. There they enjoyed swimming, walking, fishing, gardening, entertaining family and friends, and traveling the world. (H. G. passed away in 2008 after a long career as a NASA astrophysicist.) Margaret nurtured all those around her; plants, animals, friends, and family. She made friends easily and kept them dear throughout her life, including classmates from St Paul’s. She loved all animals, especially her many pet German Shepherds, all named “Sheba”. Her irrepressible spirit and wry sense of humor sustained us until the end: she often joked of being thankful she was in life’s “check-out lane” when someone complained about modern society. Margaret is survived by her only sibling, Mary Elizabeth Darr, and by so many others who adored, cherished and admired her amazing strength and beauty. This includes her seven children John, Suzanne, Bill, Jim, Michele, Patti and Chrissy, her twelve grandchildren, and three great grandchildren. A celebration of her life will be held at a later date.
See more See Less

In Memory Of Margaret P Damaré