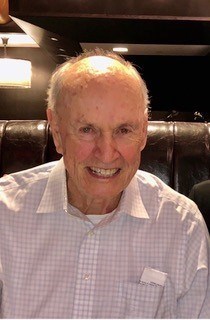 RYAN, JOHN F. Age 84, of Naples, FL, passed away on January 2, 2020. Beloved husband, best friend and soulmate of Joanna (Leary) Ryan. Loving father to Christopher M. Ryan and wife Jane, Andrew T. Ryan and wife Teri, and Anthony J. Ryan. Remembered with great love and affection by his grandchildren: Cierra, Jackson, and Jack. Dr. Ryan’s absolute loves were his wife Joanna and his family, closely followed by his passion for healing infants and children at Massachusetts General Hospital in Boston, where he was Chief of Pediatric Anesthesiology for over 30 years and a pioneer in the field of pediatric anesthesia. Dr. Ryan had a unique career: John attended Cathedral High School where he was senior class president and valedictorian. He then matriculated at Boston College where he was the valedictorian of his class of 1957. During summer breaks from medical school at Columbia University College of Physician and Surgeons, John worked for the Air Force and developed the calibration technique for measuring micrometeorites used in the early satellites and the first moon shot. After graduation, Dr. Ryan interned at St. Elizabeth’s Hospital and then spent two years at Vandenburg Air Force Base where, in March of 1965, he was awarded a Commendation Medal for his work in establishing the first intensive care unit in the United States Armed Forces. Following two years at Columbia Presbyterian Hospital, John joined Massachusetts General Hospital where he was Chief of Pediatric Anesthesiology until 2002. Also an Associate Professor of Anesthesia at the Harvard Medical School, John influenced the careers of hundreds of residents and fellows‐in‐training while instilling in them his core values of resilience, hard work, and above all, compassionate care. His authoritative textbook, A Practice of Anesthesia for Infants and Children, remains as influential today as it was when first published decades ago. Dr. Ryan was awarded The Lifetime Achievement Award from The American Society of Pediatrics in 1997. In the year 2000 he earned his Masters of Education from the Harvard Graduate School of Education and dedicated himself to perfecting the design and efficacy of resident education for Harvard Medical School and Massachusetts General Hospital. John Ryan’s skill, expertise and compassion as a physician were surpassed only by his exuberant spirit as a loving husband, father, grandfather and as a great healing force for God’s children. Donations may be made in Dr. Ryan’s memory to: The Cathedral High School Scholarship Fund, 74 Union Park Street, Boston, MA 02118. John Ryan was a natural storyteller-- click on this link, OR copy and paste the link to your browser to see and hear John tell his story: https://www.youtube.com/watch?v=dBcigPoqp6s&feature=youtu.be
See more See Less

Send flowers or a gift to a service or family's home.

In Memory Of John Francis RYAN