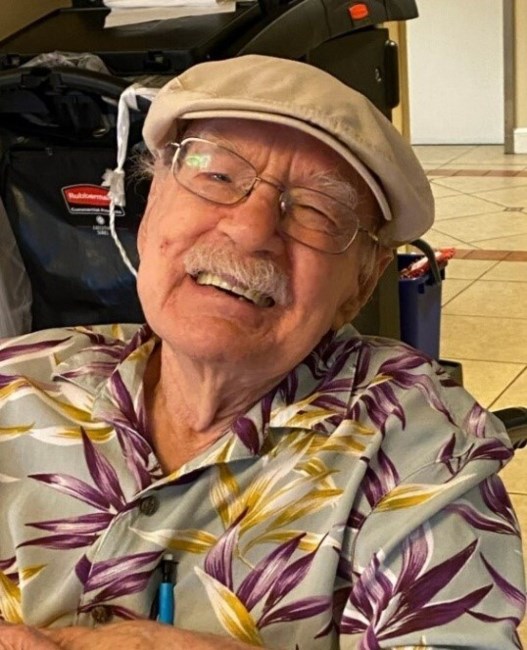 Harold W. Moore passed away on August 13 in Florida. His many friends remember him for his humor and resilience, but he was mostly known for his kindness and respect to others. He was 94. Harold was born on July 1,1928, the second son of John W. and Rosa M. Moore. As a young boy, he moved with his parents and two brothers, Gerald and Kenny, from Akron to their new farm in Hartville. There he developed his love of farming and his talent for creating just about anything needed using tools and materials at hand. In 1948 he married his high school sweetheart, LaVera Green, and together they raised two sons and three daughters. Harold worked as a machinist at the Hoover Company for over 40 years where he earned bonuses for making cost effective improvements for the company. He took on side jobs including plumbing and wiring houses. He continued to farm, first with his dad, then on his own farm on St. Peter’s Church Rd. In 1974, he purchased his parents farm where he planted Christmas trees as a retirement project in 1980 and opened for business as Moore’s Christmas Tree Farm in 1986. He used his mechanical and engineering skills to design and make much of the equipment needed on the farm which is still in use today. His many creations included an extensive addition onto the family’s first home to include a radiant water system to capture heat going up the coal furnace chimney. He built a one-man speedboat, racing until the sport was banned from local lakes. In his retirement, he crafted an ultralight complete with runway and hanger at the farm. Harold enjoyed a variety of activities. He found time to bowl, golf, ride bikes, play tennis and pickleball. He and LaVera joined a square dance group. He said he loved to fish but was terrible at it because he couldn’t keep still enough to catch anything, which surprises no one. He loved to travel! The family was always treated to a vacation in the summer—first to rented cabins or tent camping and then to the “luxury” of the trailer he remodeled. After retiring from Hoover’s, he and LaVera spent the winter months traveling to various locations before deciding to reside in Florida for the winter seasons. Harold was committed to helping others and would aid neighbors with electrical or plumbing repairs. He always had a toolbox handy to assist others. He served as a Sunday School superintendent, church custodian, council member, and as a youth group advisor. He volunteered with Meals on Wheels, Quail Hollow State Park and continued volunteering with community organizations in Florida. In 2006, LaVera was diagnosed with Alzheimer’s disease and Harold was told he had Parkinson’s. In 2008, Harold and LaVera left their beloved farm in Hartville and moved to Shell Point Retirement Community in Ft. Myers where LaVera moved into a Memory Care Unit. Harold visited her every day, and became a volunteer helping other residents. His projects continued when he turned an electric wheelchair into a golf cart so he could easily drive to see Mom and not get wet. For seven years he visited her multiple times a day, making sure she was well cared for. She died on Christmas Eve in 2015 with Harold by her side. Shortly thereafter, Harold moved to assisted living where his room quickly filled with tools and workspaces. He continued making friends, helping both residents and staff. Harold is survived by his children, David (Susan) Moore, Sharon (Ronald) Baling, Jean (Joseph) Polack, Calvin (Cathy) Moore and Denise (Michael) Rudar, eleven grandchildren and seven great grandchildren. Memorial donations can be made to Hope Hospice at Shell Point, 15010 Shell Point Blvd, Fort Myers, FL 33908. Fond memories and expressions of sympathy may be shared at www.nationalcremation.com/locations/north-fort-myers for the Moore family.
See more See Less

In Memory Of Harold Wayne Moore