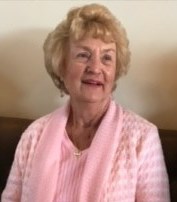 Gail Virginia Kappeler of The Villages, FL passed away on Monday November 14 at the age of 85. She was born on February 21, 1937 in Cleveland, OH where she grew up with her mom, dad, and sister, Janet. Gail graduated from West Tech High School in 1955. She worked at IBM in Boca Raton, FL. Gail was actively involved in family life, raising her children and spending time with her grandchildren. She is preceded in death by her parents, Margaret Metro Stamas and Peter Robert Stamas. She survived by her, husband John Thomas Kappeler; sister, Janet Margaret Rees; daughters, Pamela (Scott), Dawn (Michael), Traci (Angelo), Debbie, Cindy, Mary Jo (Bill); grandchildren, Jensen, Taylor, Christopher, Daniel, Brooke, Carly, Melissa, Becky Jo, Jessica, Danielle, Charlotte, Will; and great-grandchildren, Drew, Jake, Abe, and Otto. In lieu of flowers, please consider making a donation to the Alzheimer’s Association. Gail will be forever in our hearts.
See more See Less

In Memory Of Gail Virginia Kappeler